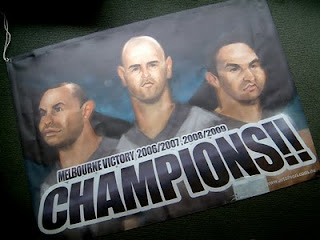 Incredible night it was on the weekend where about 45,000 people just went nuts for an A-league football match in 120 minutes. Then afterall of that you didn't know what to do. What, go home? That's it. End of story. Surreal.

Even though the night didn't reeeeeeeally end the way some would have hoped for , I did manage to create a banner to spur on the team, to inspire the fans and add to the atmosphere. Expertly printed by the guys at Sumo Visual, considering all the things that could've gone wrong, well, nothing did.

But a win on the night for the Melbourne Victory over Sydney FC would've been icing!
Posted by Unknown at 6:00 PM