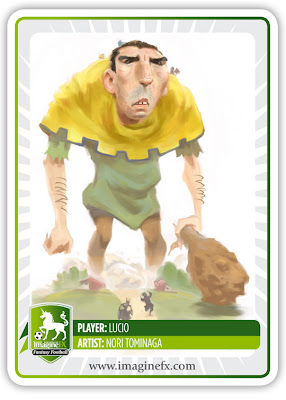 Some good news. I was lucky enough to be selected in Imagine FX's 'Best 11' Fantasy football team! The competition asked to depict a star in World cup history in a fantasy setting, focusing on creativity and character design.

I chose Brazilian captain Lucio as a gentle giant. For all of Brazil's flair in attack, Lucio stands alone as the unsung hero in defense. He doesn't get caught up in the lights, he does his job humbly. One of the few gentleman of the sport.

The only problem is, he's not the prettiest face out there. His dark eyes and colossal frame strikes fear into those who see him. He'd love to sit and have a nice old yarn about the beauty of the world, the great Gods in the heavens, but no, he is left alone. Isolated. All he wants is to be understood.

I believe the results of the competition are published in the current edition of ImagineFX so do yourself a favour and drop by your newsagent and have a look!

Good luck Brazil for tonight!
Posted by Unknown at 12:51 AM 12 comments: