Pim Verbeek at the Bald Archies 2010 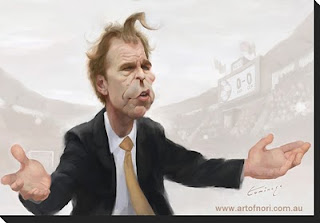 So it's all good to post up now, I was a finalist at this years spoof to Australia's Archibald Prize, the Bald Archy's.

Congratulations to Judy Nadin whose hilarious painting of Bert made headlines pretty much everywhere. Happy to be part of all the brew-ha-ha really.

So, okay, he's not the most glamourous, most famous Socceroos coach ever in Australia. But in this sport loving culture we have here, I thought it would be a travesty to not have an Australian football piece in this gllllllllorious World Cup year. Way back when, I just found his head to be really funny. It's commanding but if you were down 2-0 at half time, would you really take anything that came out his mouth seriously? What about the "Something About Mary" tuft of hair waving around.

And it doesn't look like it, but this piece is big. HUUUUUUUUGE in fact. So do yourself a favour and get down to the Bald Archy exhibition touring around Australia at the moment. It's in Sydney right now till the 25th of April at the ABC Ultimo Centre. Further dates can be found here.