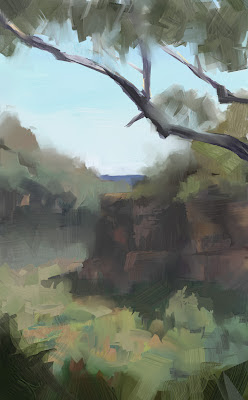 Not too far out of Sydney are the spectacular Blue Mountains. A clear, crisp and seemingly endless landscape full of inspiring locations to paint.

Which prompted me to try something different; haul a laptop and bushwalk over rocky terrain. Yes, I figured that traditionals were too messy and bulky to carry, and the iPad was too cumbersome to paint on. What I found out in the end was there were alot of disadvantages using the laptop method too.

Running against battery life was part of the problem. Poor screen brightness in the open sun was another (I hid under the shade of my coat to block the sun off my screen to the bemusement of passers by). And ofcourse, laptops really aren't meant to be exposed to drizzle or any other of nature's extremities - so it's limited physically.

All in all it was a fun experience - one where I think I'll spend several days calmly picking spots to paint rather than to rush around with an immanently setting sun.

Below is a screen capture of the experience. I think you can see how I struggled at the beginning to lock in a value structure - with the rolling clouds and what have you. But towards the end I began to enjoy it alot more.