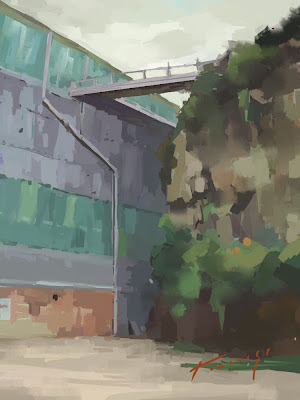 Last weekend was my first Sketchcrawl in Sydney and there were 30 artists, young and old, whipping out their pencils and drawing. Having done Sketchcrawl's in Melbourne for so long, I was inspired (and secretly jealous) how large the community was here - to see how eager they were to sketch the world around them.

The group went to Cockatoo Island, a relaxing 15 minute ferry ride from Sydney. It was a beautiful and alien looking place. Old machines, warehouses and buildings over looking the Sydney skyline. The one above is yet another iPad sketch. I was barely on Cockatoo Island when the scene just grabbed me. It was an overcast morning and a little damp, this seemed to saturate the colours on the cliff faces. Yet right next to it was a giant, man made warehouse which was coloured a fading sky blue. Rarely in the modern world, I think, would this exist anymore, nature would just get mowed down. But here they seemed to co-exist, frozen in time.

The sketches below are from a more traditional media known as "pen". They are shot on a more prehistoric thing called a Nokia phone camera. Unfortunately I don't have all my equipment here so for now, this'll do.

Please do yourself a favour and check out the brilliant work of the other Sydney sketchers. And while your at it, the rest of the world! 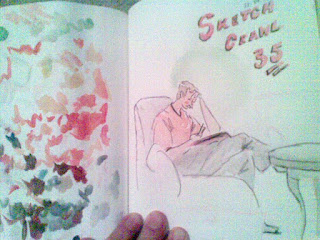 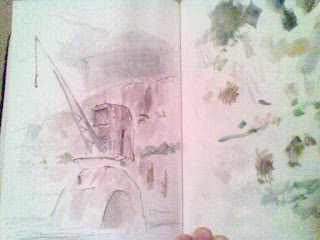