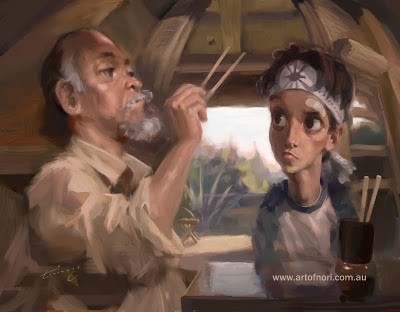 There was the Karate Kid of 2010, but nothing, repeat, nothing compares to the trilogy of the 1980s. The movie still sits proudly in my DVD collection as one of my all-time most inspirational movies that defined my childhood. This, ofcourse, is the hilarious Fly catching scene (that was somewhat replicated in this year's film) with Miyagi's tagline "Man who catch fly with chopstick accomplish anything".

So I thought, hey, if that movie had such an impact on my life, why not use it as the theme to the upcoming Drawtism exhibition to raise awareness of those affected by Autism Spectrum Disorder. Watching it now, almost 30 years after its original release, it dealt with the mixing of middle class America with different cultures, classes and values. Yet despite all the social constraints there was some commonality that allowed all characters (not just Miyagi and Daniel) to succeed. Loosely, this is what I felt the challenge of having autism was - the overcoming of the barriers of communication and expressing thoughts, ideas and actions freely.

Then again, if over analysing something wasn't so annoying, the Karate Kid just remains to be a legendary film.

This piece as well as many others will be auctioned off for the charity in November and will be on display at the Melbourne Treasury Building from this Friday!
Posted by Unknown at 7:30 PM